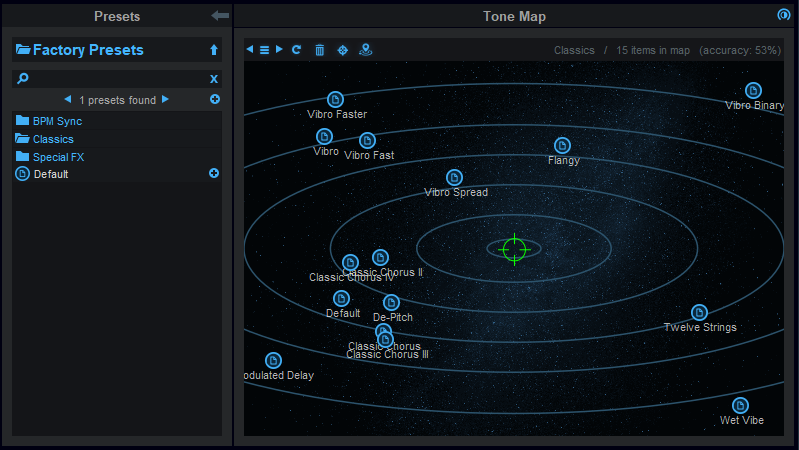 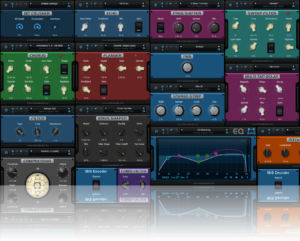 Instead of going thru a more or less classified list of factory presets to see what an effect can do, you can now use the predefined “tone maps” to navigate presets in 2D: the idea is that presets that are close to each other on the map will sound similar, while presets that are in very different location will have a more different tone.

Here is an example of a factory tone map for the built-in Reverb plug-in: As you can see, room presets are located in the center area, while long tail reverbs are on the right, and more echo-ish tones with less dense reflections can be found on the left.

On the map, you can click on the preset icons to load them instantly and hear what they sound like. But hey, we are not done yet: there is much more! While exploring presets maps, you can also move the green cursor around, between presets, to create brand new tones out of existing presets.

Tone maps use an algorithm that is specific to every single map to morph between presets, based on the location of the cursor on the map – it is not just a simple interpolation between parameters.

This lets you find the right tone without even knowing the name of the parameters of the effect: looking for a long tail reverb that sounds a bit dark but not dull? Just find the right spot on the map in a few seconds, instead of spending hours searching how to tweak each parameter individually!

Create Your Own Maps

Navigating factory presets in 2D with predefined factory map is a nice feature, but what about user presets? What if I cannot find a predefined map that works for me?

Don’t worry: you can actually create your own maps with your own presets: the tone map engine will analyze the presets that you choose and will build a map for you, checking tones similarity on the fly. And here you go, you can now navigate your own world of presets! Adding a preset to the map later will instantly modify it to take the new tone into account. 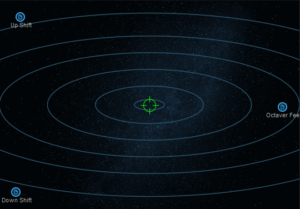 Another way to use tone maps is to select just a few presets that you like (at least 3) to create a very small map for “simple” tone morphing with the 2D joystick control.

Tones maps are also a great way to learn how actual effect parameters work: check how the knobs of the plug-in move while navigating on a map, to understand the influence of parameters on the effect:

You can experiment with multiple maps, but smaller maps will in general be easier to use for this purpose.

Also, most built-in plug-ins come with a “typical” map that shows the typical tones you can get out of them. It is a great way to discover the capabilities of an effect and understand how it works.