In addition to the controls offered in the main user interface, Blue Cat's Dynamics has various settings that let you fine tune the behavior of the plug-in. You can choose to change these settings either for the current preset or globally for all instances of the plug-in.

The settings available in this window apply to all instances of the plug-in, for all presets, if not overridden in the presets settings. Consider these settings as “default” settings. 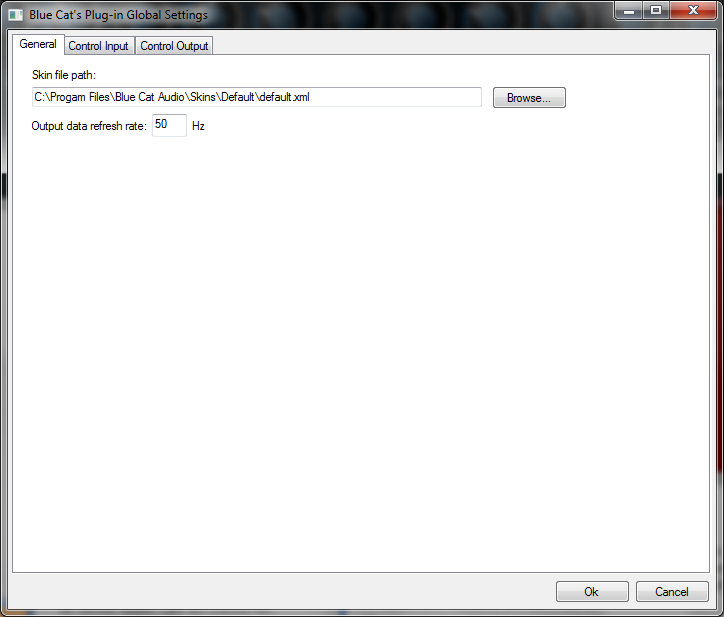 The plug-in offers a couple of settings that affect the way it is controlled by MIDI messages or automation. While the first settings only apply to MIDI control, the "Control Response", "Min" and "Max" settings apply to both automation and MIDI control.

For each parameter you can define a default MIDI channel and CC number. You can then control the plug-in with an external MIDI controller or one of our plug-ins that generate MIDI messages.

The settings below are available for each plug-in parameter. 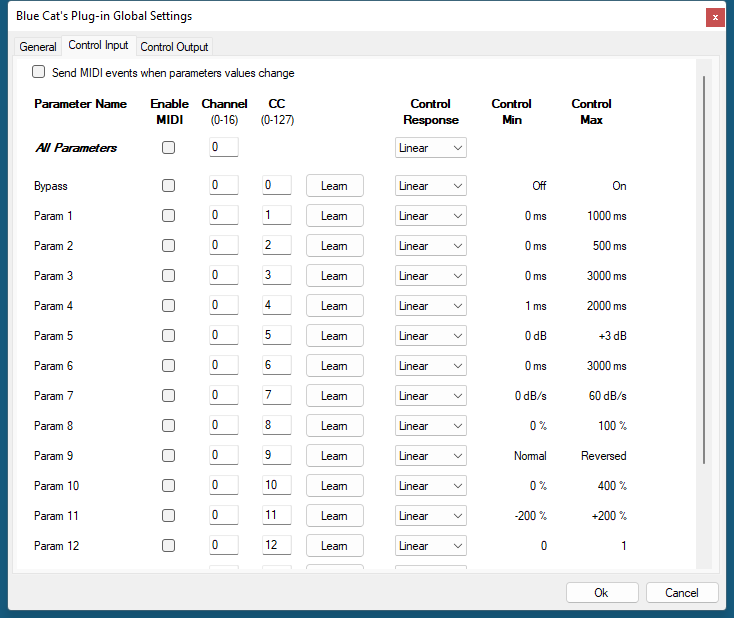 Note: if the Min value is higher than the Max value, the response curve will be reversed: increasing the control value will decrease the parameter value.

Note: if you double click on the parameter text control boxes for the max and min values, a “fine tuning” edit box will appear and let you change the min and max values with more precision:

"Send MIDI events when parameters values change": activate this option when using a control surface that accepts MIDI events as input. MIDI messages will be sent to the output of the plug-in when the user change the parameters values in the user interface, to keep the software and the controller in sync. MIDI is only sent for parameters that are activated for MIDI control.

You can set the same properties for the output parameters as for the input parameters: in this case, they may trigger MIDI CC messages or generate automation curves when modified. Since it's output, you cannot set the channel to MIDI Omni, so you must choose a channel. 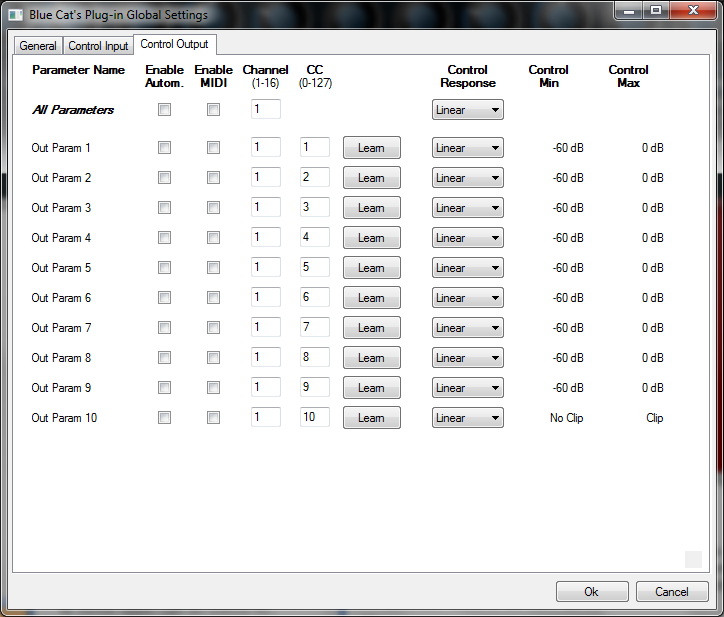 Note: if the Min value is higher than the Max value, the response curve will be reversed: increasing the control value will decrease the parameter value.

Note: if you double click on the parameter text control boxes for the max and min values, a “fine tuning” edit box will appear and let you change the min and max values with more precision:

In this window you can change the settings for the current preset of the current instance of the plug-in only.

You can choose to use the global skin setting or to change the skin for the current preset. This way you can have different skins for different instances of the plug-in in the same session in order to differentiate them. 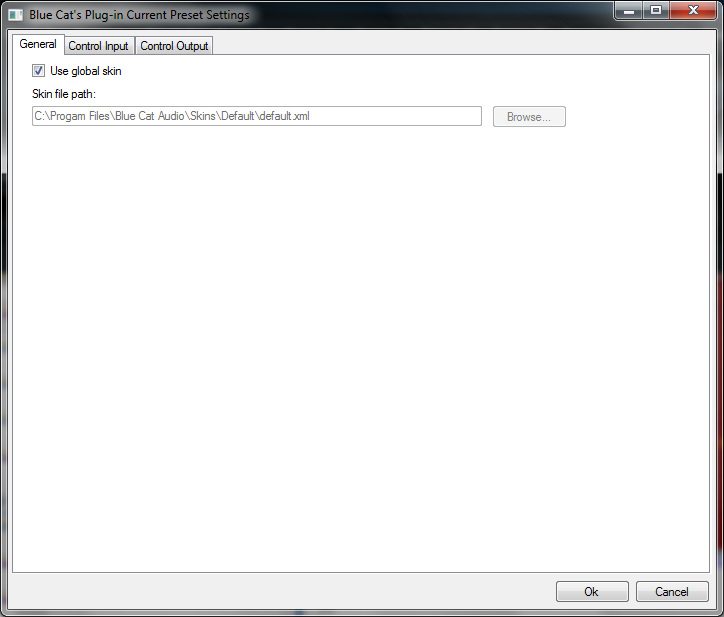 Use the global settings or override them for the current preset. The parameters are the same as for the global input settings. 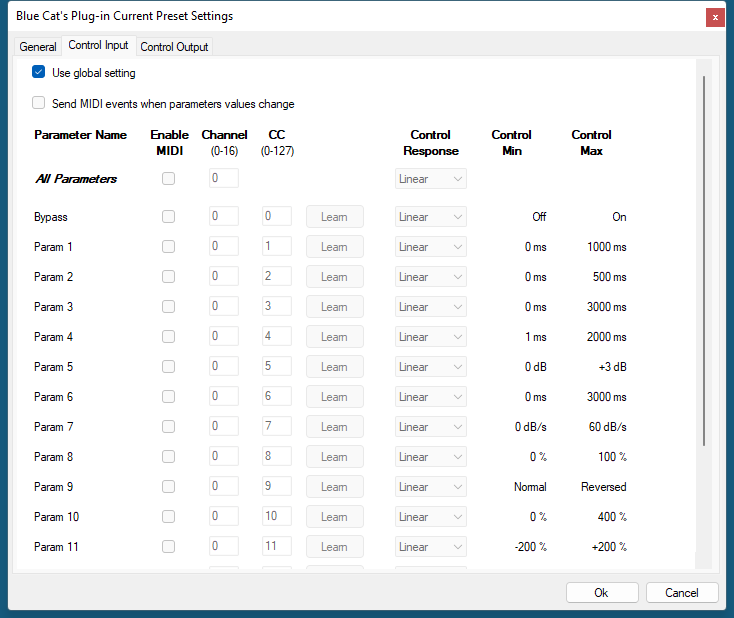 Use the global settings or override them for the current preset. The parameters are the same as for the global output settings. 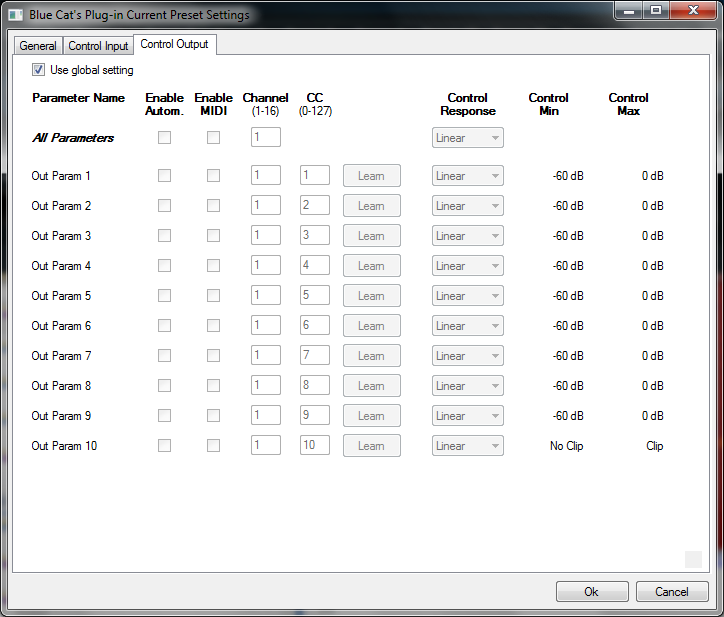 Blue Cat's Dynamics integrates Blue Cat's skinning engine that allows you to customize the user interface. You can download alternate skins for your plug-in at the following address:

If you don't find a skin that fits your need or if you want a custom one, you can choose to create your own skin.

Note: in some host applications, the plug-in window won't resize automatically when you choose a skin with a different size. In this case, just close the window and re-open it: it will be displayed with the right size.

The skins menu can be opened from the main menu. It displays the list of skins available for the plug-in as well as commands to manage the skin used by default when no preset skin has been selected: 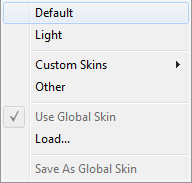 To select user skins directly from the skins menu, install them in the "Skins" directory available in the plug-in's documents folder:

The skin engine will scan this folder for new skins (xml files) and display them in the menu. The skin files should be in the root skins folder or in a subdirectory inside this folder: subdirectories are not scanned recursively.

Other Methods to Select Skins

You can also select the skins in the settings panels available from the main menu:

You can create custom skins for your plug-in in order to adapt it to your exact needs. You can change its look and feel and make it completely integrated in your virtual studio!

Just read the Blue Cat's Skinning Language manual and download the samples for the tutorial on http://www.bluecataudio.com/Skins. You can get ready to create your own skins in a few minutes. You can then share your skins on our website.

Many Tutorials are available on our website. They cover a wide range of topics and host applications.

You can find here a list of tutorials related to the Blue Cat's Dynamics plug-in.

We encourage our customers to propose their own skins for our products and we often propose alternative skins to let you choose the one that best suits your needs. You can check Blue Cat's Dynamics skins page to get the latest skins.

As you can see in the history log below, we care about constantly updating our products in order to give you the latest technology available. Please visit our website often to check if Blue Cat's Dynamics has been updated, or subscribe to our Newsletter to be informed of the latest news about our products.

Note: minor version updates are available from the same location as the original full version download (link received by email upon purchase). The demo version publicly available on our website will not let you register.


Thanks again for choosing our software!

See you soon on www.bluecataudio.com!