Did you know that there are two versions of Blue Cat’s PatchWork?

In case you have not noticed, the PatchWork plug-in comes in two flavors: effect (“PatchWork”) or virtual instrument (“PatchWork Synth”). That’s two different plug-ins that you may want to use differently.

First, both plug-ins do not report the same type to the host application: in many DAWs, the instrument version is the only one that will be listed when inserting a virtual instrument on a track, while the effect will be displayed when you want to insert an effect. But that’s not true in all hosts (Pro Tools for instance lets you choose) – so you need to pick up the right one!

Does it mean I cannot load effects in the Synth and Virtual Instruments in the Effect?

No, both plug-ins will let you load any plug-in, regardless of its type, so that you can mix both (audio and MIDI) effects and virtual instruments in the same PatchWork session. However loading virtual instruments in the effect version may have unwanted side effects in some DAWs: for example starting with Pro Tools 12, dynamic plugin processing may be triggered and loaded instruments will not produce any sound if PatchWork is fed with silence. So you will want to use the Synth version instead!

Well, there are actually three versions!

That’s for the Audio Unit format only: an extra “MFX” (Midi FX) version can be used on Logic’s MIDI tracks to host MIDI effects, step sequencers or arpegiators: no audio is processed, only MIDI events. 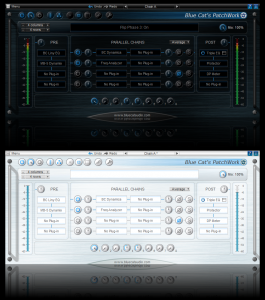 Miaow Wah: The Future of Wah?

8 thoughts on “Effect or Virtual Instrument?”