Did you know that you can use Blue Cat’s PatchWork to extend the capabilities of your favorite plug-ins? That you can just “wrap” the plug-in(s) inside Patchwork to create an enhanced version and get much more out of them?

Let’s see in details how your plug-ins can benefit from being loaded thru PatchWork!

If your favorite plug-in cannot be loaded in Pro Tools, Logic, Cubase, Live or Reason, don’t panic: it can probably be loaded thru Patchwork: PatchWork is available as a VST, Audio Unit, VST3 or AAX plug-in and can load third party VST, VST3 or Audio Unit plug-ins.

PatchWork can also be loaded as a standalone application, so your plug-in can run almost independently, without having to launch a heavy full featured (and sometimes slow) DAW!

Your favorite plug-in does not have a dry/wet control? Just load it in Patchwork and use the mix knob to select the amount of wet vs dry signal, it’s as simple as that!

You are just a few clicks away from parallel compression, with any compressor plug-in!

Most plug-ins including delays or reverbs do not let the effect tail ring when bypassed, and sometimes they will even abruptly stop processing, resulting in audio glitches. While this is fine while doing A/B comparisons in a mixing environment, it can be a real problem when used to play live and activating/deactivating effects.

Patchwork offers a “tail spillover” option that will let effect tail ring until it’s done. Wrap your plug-in inside PatchWork and use PatchWork’s smooth bypass (glitch free bypass) to overcome these limitations!

Idle Processing (no CPU on silence)

PatchWork is able to detect when fed with silence and it will stop processing audio when not required (tail ended, no virtual instrument loaded etc.). So if your plug-in or DAW does not implement this feature, you can wrap the plug-in into PatchWork and it will optimize CPU usage for you!

PatchWork also includes a CPU meter that lets you check how much CPU the hosted plug-in(s) is using. 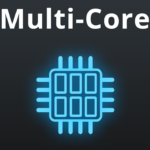 Since PatchWork 2.5, parallel chains can be computed on separate CPU cores. If your virtual instrument does not spread its processing onto multiple cores, you can use PatchWork to do it for you and increase polyphony:

Simply insert several instances on parallel chains, with a MIDI filter before (Plug’n Script has a MIDI range filter script that just does that for example) to limit the range of notes used by each instance:

When playing multiple notes at the same time, they will be spread across parallel chains (and across CPU core accordingly). And you can use more instances if you need even more polyphony! 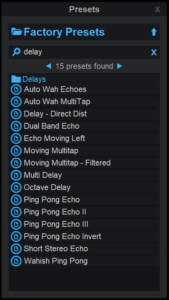 Many plug-ins have limited capabilities to manage presets. PatchWork has its own preset browser, with built-in search, folders support and more.

You can now sort them, search by keyword, and even mix presets from different plug-ins, all in the same place.

A wrapped plug-in can benefit from these features too! For example, if you are using PatchWork to manage your plug-ins presets, you can load them via MIDI instantly (just activate PatchWork’s MIDI Program Change feature).

Individual parameters can also benefit from MIDI control via PatchWork: map the parameters of the wrapped plug-in (as shown in this video) and use MIDI learn on the mapped parameters to control them with any MIDI controller.

As you can see, many plug-ins can do a lot more,  just by being loaded inside PatchWork!

It is unfortunately not possible to go thru all PatchWork’s features here, but it has many other capabilities that may help you get the best of your plug-ins (built-in level meters, pre/post gain link, drag and drop from file system, Audio Unit MIDI FX support…).

If you do not own PatchWork already, you can download and try the free demo and see what it can do for you! 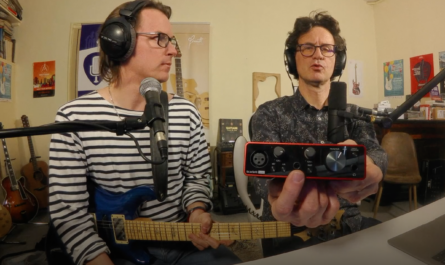 How to Setup an Audio Interface to Play Guitar on Windows