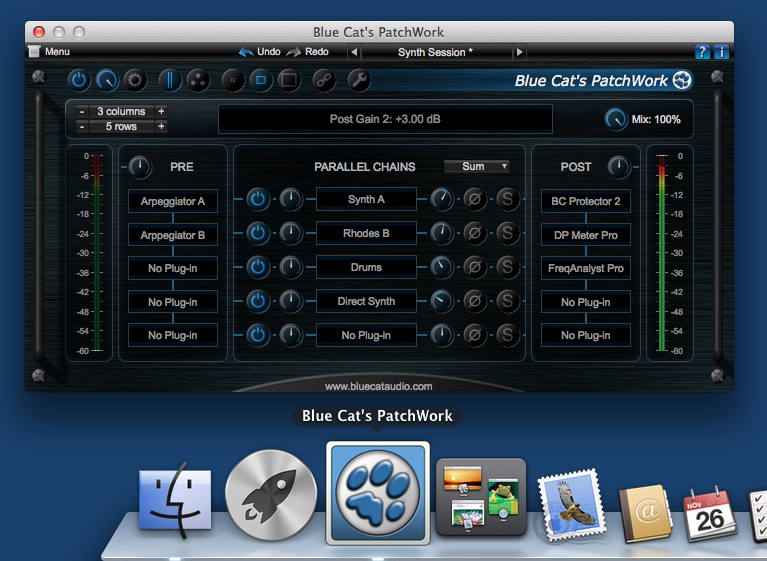 Since the release of Blue Cat’s PatchWork 1.6 yesterday, we have been asked a couple of times what it is possible to do with the standalone version of the software.

So here is a brief overview and a few ideas about how Blue Cat’s PatchWork standalone host can be used! This is of course not exhaustive, so feel free to comment this post and tell us how YOU use it!

The main purpose of Blue Cat’s PatchWork standalone is live usage: with an appropriate audio interface (aka sound card),  it is capable to perform at low latencies as a real time audio processor or instrument: it can load and host third party audio plug-ins, so that you can use them quickly in real time.

PatchWork as a Virtual Instrument

If you load one or several virtual instruments plug-ins into Blue Cat’s PatchWork, you can use them with any MIDI controller connected to your PC or Mac. Hit a key on the keyboard and you will hear the result at the output the selected audio interface instantly. It is as simple as that: Blue Cat’s PatchWork can easily transform your computer into a musical instrument.

A bit more advanced, but still quite simple, you can also patch MIDI effects before your virtual instruments (arpegiators, MIDI filters, step sequencers…) and build your own “meta-instrument” that you can play with one or more MIDI controllers.

PatchWork as an Audio Processor

If your audio interface has inputs, you can just plug any instrument or microphone into it and process the sound in Blue Cat’s PatchWork, using your favorite audio plug-ins.

For example, plug your guitar into your audio interface and create your own multi effects processor using Blue Cat’s Patchwork and VST plug-ins. You can save and load any effect chain instantly using presets. You can even assign and control the parameters of inserted plug-ins with any MIDI controller (foot pedal, control surface) that is connected to your computer via MIDI: volume, distortion, delay time… All controlled with your feet if you want.

Don’t throw away your amplifier though: why not just plug your computer into it and PLAY IT LOUD?

PatchWork as One Man Band

As you have understood, you can mix both approaches and use audio inputs as well as virtual instruments or drums machine plug-ins all together inside Blue Cat’s PatchWork.

It looks like it’s time to start your one-man band: you can launch sequences, keep drum loops running in the background and play live altogether at the same time, all within the PatchWork Application! It will all be kept synchronized by the application (if using plug-ins that support it).

Using (again) a plug-in able to record audio to file (For example, Blue Cat’s Plug’n Script has a wav file recording script that can be used for this purpose), you can record your performance to an audio file. Whether you are using virtual instruments or real instruments connected to the computer does not matter, you can just record everything at once in a single file.

That’s a very fast and easy way to record yourself without having to launch a full featured DAW and create audio and MIDI tracks for all instruments. Don’t lose your inspiration: play and record everything thru Blue Cat’s PatchWork, instantly!

Also, since you can place the recorder plug-in anywhere in the chain, you can either record the full performance at the end of the application, or just the incoming dry signal, so that it can be re-processed differently later.

PatchWork as a Standalone Analyzer

With our audio analysis plug-ins, Blue Cat’s PatchWork can be turned into a full-featured standalone audio analyzer: you can monitor and troubleshoot incoming signals in real time.

It is often more convenient to quickly launch Blue Cat’s PatchWork to create and test your effects chains rather than bring a full featured DAW into memory. Once you are done, just save the chains as a preset. These presets can be loaded later in the plug-in version of Blue Cat’s PatchWork (VST, AAX, Audio Unit or DirectX supported), right into your DAW of choice.

That’s already a couple of ideas to take advantage of our new application, but there are probably lots of other ways to use it we have not even thought about… So please comment below and tell us more about what you use the PatchWork application or plug-in for!

26 thoughts on “Blue Cat’s PatchWork Standalone: What Can It Do for You?”