Already announced some time ago, Blue Cat’s PatchWork 1.4 is now ready for download! 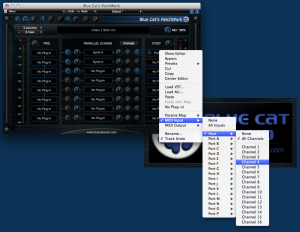 As usual, this update is free for existing customers and can be downloaded from the same page as the original full version.

MIDI events can now be filtered by channel when sent to sub-plug-ins. So it is now possible to control hosted effects or virtual instruments separately from the outside, using different MIDI channels.

The new version of the plug-in lets you choose if you want to use gain compensation or not when summing the parallel chains. This makes the plug-in more flexible when used with virtual instruments: the default mode (average) will compensate the gain increase when adding new parallel chains, which is very handy when applying effects in parallel (no gain change), but it can be annoying when adding and removing synths for comparison. So you can now use the new “sum” mode that will treat parallel chains as “standard” busses and will not compensate the gain increase/decrease when adding/removing chains.

It is even more useful now that all chains have a solo button: you can quickly compare parallel chains with a simple click with no gain change when using multiple synths.

“Sum” mode is also recommended when applying parallel dynamics effects that may have an impact on perceived loudness.

Behind The Scenes: A Truly Massive Update