Still Wondering which one is best for you?

All right, so now that you have read our post and tried both Blue Cat’s MB-7 Mixer and Blue Cat’s PatchWork, and you are still wondering which one to pick up?

Here is the answer: don’t bother, and pick up both! Want to know why? Read below!

As explained here, both plug-ins are very different, so there is no reason why one would replace the other. So if you are still hesitating, that’s because you need both! 🙂

They Can Extend Each Other 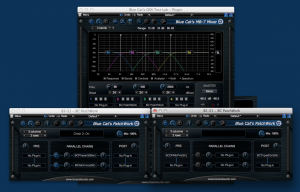 If you need parallel processing or an individual “Mix” control for each plug-in within your multi band setup, you can simply use Blue Cat’s PatchWork inside one or more bands of Blue Cat’s MB-7 Mixer, and here you go: multi band VST processing with parallel chains and dry/wet control!

Since windows layout is kept and restored when closing/opening Blue Cat’s MB-7 Mixer, the inserted PatchWorks are just an extension of the MB-7 Mixer’s plug-in slots. 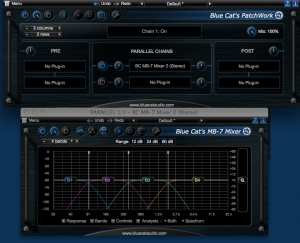 In addition to be able to instantiate one into another, both plug-ins can also co-operate: for example, you can copy or transfer a plug-in and its settings from one to the other: 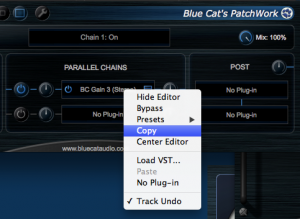 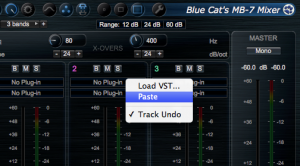 … And Paste it into Blue Cat’s MB-7 Mixer

Ready to go, or still not convinced? Go try the demos!